The pictures are in reverse order. The numbers are inserted in the appropriate places in the story. 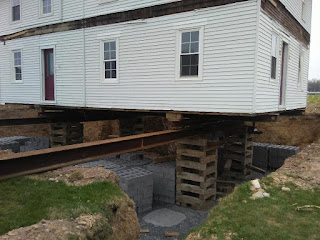 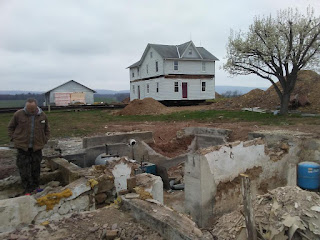 AB 8 - The house was rolled back on rails to a nearby location. 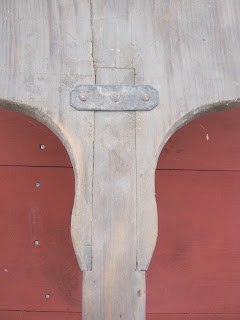 AB 7 A - Closeup showing how the handle connects to the paddle. 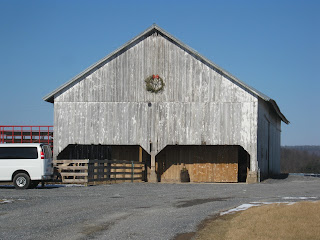 AB 6 - The Brooks barn, that housed the dairy herd, with its rare gable overhang. 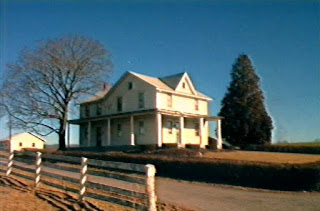 AB 5 - The Brooks farmhouse as it looked in 1995 when it was acquired by Steve Jones. Schuylkill County Tax Assessment photograph.

AB 4 A - Signatures of Albert Brooks and Jane Brooks, as the buyers, and John Maurer and Leonard K. Dietrich as witnesses to the 1908 deed that transferred ownership of the property from Daniel H. and Ida Maurer to the Brooks. 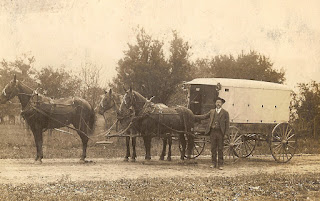 AB 4 - Unidentified Mahantongo huckster, circa 1900. The Faye A. Kopp Photograph Collection of the Mahantongo Heritage Center. 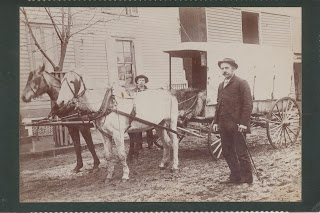 AB 3 - “Dietrich and his wagon,” circa 1900. The Larona Heim Photograph Collection of the Mahantongo Heritage Center. 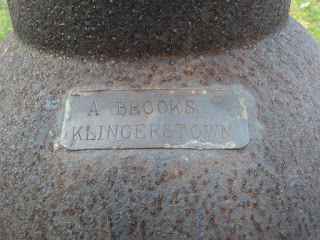 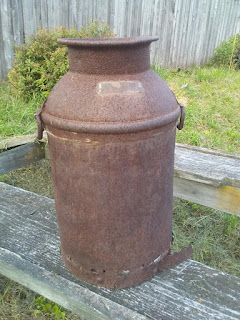 The Abraham Brooks Milk Can

In researching area post offices which, in the nineteenth century were not free-standing but always combined with an existing business, typically a general store, I ended up on the front porch of the former post office at Fountain. I knocked on the door as I had some questions, and while waiting for someone to answer, I noticed a metal milk can used for a decorative display. I also noticed it had a metal label and so, being naturally inquisitive, I looked closely; the brass label said, “A. Brooks – Klingerstown.”

I was surprised as this was the first time I'd heard that the farm of Abraham Brooks, on Ridge Road just west of Mahantongo Elementary School, had been a dairy farm at some point, and a large enough operation at that to warrant having its own reusable milk cans.

The Brooks connection is significant because it was the only known Jewish family to live in the Mahantongo Valley.

Actually, only Abraham was Jewish, as neighbor Joan Snyder, who knew the family and lives on the other side of Ridge Road, said he married a local Pennsylvania Dutch woman, Jane Fetterolf. Snyder recalls that Brooks married Fetterolf first, and then they bought the farm. They eventually had five children: Harry, who became a doctor in Harrisburg; Howard, who became a dentist in the Harrisburg area; Maynard, who continued to live at the family farm and did a little farming, as Joan recalls, but worked in Pottsville for the state; Verna, who became a professor, with Hazel as the youngest child, who became a school teacher and eventually moved to North Carolina.

Evidently the family converted to Christianity as they attended Salem Church. However, I was told years ago that Maynard continued to observe the high holy days because he took them off from work. But, unfortunately, even conversion didn't help the family escape local antisemitism. The late Avice Morgan said the family was sometimes terrorized by local punks going by late at night and screaming “Judah! Judah!” from their cars.

Only Maynard, of the five children, stayed in the area. The rest, being professionals of one kind or other, all left.

We know nothing about the origins of the family, though it's possible, since several of the children ended up in the Harrisburg area, that perhaps Abraham came from there. The family's European origin is also unknown, as is the family's presumed original name. For example, if the family came from Germany, the original name might have been a variation on “Bach,” German for brook. However, if the family came from Eastern Europe and had a Yiddish name, it may have been something like “Taykh.” We simply don't know.

Snyder, who as a youngster knew the family, fondly recalled the family and its patriarch Abraham, who people knew as Abe, Abbie, and even Brooksie. He was a huckster who went farm to farm selling a variety of sewing notions, household tools, spices, and dry goods like fabric. In the earliest days, Snyder said he went from farm to farm with a horse and buggy, but he later got a huckster van. Like most area hucksters, he may have also sharpened scissors and knives, repaired broken umbrellas, and the like.

At some point he went into the egg business with a partner.

“I'd go over and he was grading eggs,” she recalled.

The men had a route that took them across the river, crossing at Millersburg on the ferry.

Snyder said that Abe was very protective of her.

“I would go up there [to the house] for the bus, but he wouldn't let me go out until the bus came.”

Abraham's market route included neighboring coal-region towns such as Shenandoah and evidently became rather well known. Pitman native James Hepler had a market route with his father, the late Leon “Link” Hepler, that also included Shenandoah, and people there, learning they were from Pitman, sometimes asked, “Do you know Brooksie?”

Now, with finding the milk can, we also know he operated, at least for a time, a dairy farm. The milk can was owned by Nikki Dietrich, and originally came from her father, Leonard Dietrich Jr.'s, farm west of Franklin Square, which places it within several miles of the Brooks farm. There was a connection between the Brooks and the Dietrich families as a Leonard R. Dietrich witnessed the original land sale that transferred the property from Daniel Maurer to Albert Brooks in 1908.

Fortunately, Nikki Dietrich was willing to swap milk cans, and so the Brooks can is now in the collection of the Mahantongo Heritage Center.

Abraham Brooks bought the farm in 1908 from Daniel H. Maurer who, with his wife Ida, owned extensive property east of Rough and Ready. According to the deed, Brooks was already living in the area. It also says that Maurer himself acquired the property in 1883 from Abbie Maurer.

The farm is not shown on the 1875 County Atlas of Schuylkill by F. W. Beers & Co., so perhaps the buildings were constructed after Daniel Maurer acquired the property. Or, since no buildings are mentioned in the 1908 deed, perhaps Brooks himself had them constructed. The farm originally included land on both sides of Ridge Road.

The Brooks barn is unusual in that it's not a bank barn typical of the area, built into a slope with a ramp on one long side leading up to the main floor where grain, straw, hay, and wagons were stored, with an overhang protecting the lower stable area for livestock.

With the barn located on the level top of the ridge, the narrow, gable ends face north and south, with a protective overhang on the south side. Large double barn doors on opposite sites of each other of the long sides, east and west, allow wagons to pull into the barn, unload, and then proceed directly ahead and outside. This is impossible with bank barns as wagons must be backed out the same way they enter. entry onto the same level as the stable. So livestock was penned on the south side, and on the same level as the wagon entrances.

I only know of one other similar barn in the valley and it is located not far away on Mill Road and it, too, is built on level ground. It is also a late barn, and perhaps the two were built by the same person.

It's possible that Brooks purchased the farm with a dairy in mind, so that he could add milk, cream, and butter, and possibly eggs and poultry as well, to the other items he took from farm to farm.

By the 1995 sale, only the barn, the house, and the summer house behind it were left from the farm's early days. However, a wooden, long-handled baking peel sold at that sale indicated the possibility that the farm, as late as it was, likely had a free-standing, brick-domed, outdoor baking oven on site as well.

That the peel itself is late construction is indicated by its two-piece construction, with the handle fitted into a slot of the broader paddle and attached with a metal plate and large brads. Earlier baking peels are usually made from a single piece of wood. The peel is now in the collection of the Mahantongo Heritage Center.

After Abraham's death, the land passed to his son Maynard, who died in 1983, and then to his remaining three siblings, who sold it at public sale in 1995 to Steve Jones. Most recently, it was purchased by Jessie and Sadie Fisher, who added a chicken house to the north, and moved the house further back on the property so a larger cellar could be constructed and additions made for a large family.

In the late 1950s, a second parcel also owned by Abraham Brooks was acquired for the now-adjacent Mahantongo Elementary School when the prior one-room school system was consolidated into a single building.

So the farm of Abraham Brooks has seen many changes through the years, as it has been Pennsylvania Dutch, Jewish, and now Amish. But the nearly unique barn that once housed the Brooks dairy remains, and the house, while greatly modified, continues to shelter new generations.

Which is how stopping to ask about the former Fountain post office led in an entirely unexpected direction.

3. AB 3 - “Dietrich and his wagon,” circa 1900. The Larona Heim Photograph Collection of the Mahantongo Heritage Center.

4. AB 4 - Unidentified Mahantongo huckster, circa 1900. The Faye A. Kopp Photograph Collection of the Mahantongo Heritage Center.

5. AB 4 A - Signatures of Albert Brooks and Jane Brooks, as the buyers, and John Maurer and Leonard K. Dietrich as witnesses to the 1908 deed that transferred ownership of the property from Daniel H. and Ida Maurer to the Brooks.

6. AB 5 - The Brooks farmhouse as it looked in 1995 when it was acquired by Steve Jones. Schuylkill County Tax Assessment photograph.

7. AB 6 - The Brooks barn, that housed the dairy herd, with its rare gable overhang.

9. AB 7 A - Closeup showing how the handle connects to the paddle.

9. AB 8 - The house was rolled back on rails to a nearby location.

The Brooks barn that housed the dairy herd with its rare gable overhang.

10. AB 9 - New cellar foundation walls were constructed so the house could be lowered onto them.

Posted by Christian and Johannes at 1:00 PM