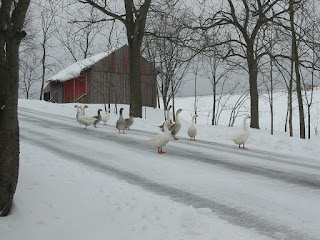 “Girls! Girls!” I'd cry as I walked down to the chicken yard with a bowl of rice, the hens' favorite food. And both of them (we were down to just two, through attrition, from a dozen just last year before foxes got to them), the Barred Rock with her grey and black stripes, and the Rhode Island Red with the yellow star on her red chest, would come running towards me. They were so happy  as they followed me into the chicken yard and I laid the rice on the ground and they eagerly started eating. It was our daily routine and it meant so much to the three of us, and now the Rhode Island Red is dead and her sister has no idea where she is and she won't even go into the chicken yard anymore. She no longer roosts in the house at night and I have no idea where she is, except that our routine is gone and will not return. We do have a replacement group of eight hens I bought in early summer to expand the flock but they roost in various trees and not in the chicken house and the rice doesn't mean anything to them. So I must adapt to new ways while missing the moments I had with my two girls. 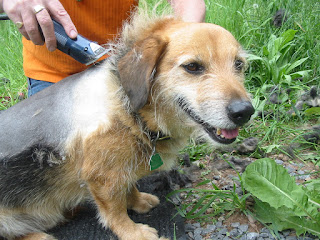 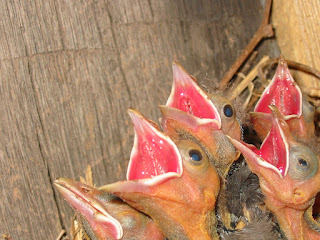 I knew Bowser was blind the moment I saw his eyes. It was early morning and I was awakened by the sound of a barking dog outside, rare because my dog was with me and Zephram’s dog was down with him.
I opened the door and there he was, wandering back and forth, not knowing where he was and walking into shrubs and trees. I immediately named him Bowser and realized someone had dropped him off, someone for whom Bowser had become too much to handle and who thought the Hermitage would be the best place for him. But I also immediately knew we could not handle another dog because the two we have are highly strung and overly sensitive. They cannot share their respective humans with another dog.
We decided the only thing to do was to take him to a no-kill shelter. We found one, where the staff was not pleased at yet another dog to feed and place. A quick inspection also revealed what I had not noticed, that he had advanced testicular cancer, with a huge lump on his scrotum. He needed treatment so a vet was called and preparations were made to take Bowser immediately over for an examination.
I never saw him again and made no effort to find out what happened to him, whether he was treated or put to sleep. By giving him away as he had been given to us, Bowser was out of my life. Still, it was a horrible decision to have to make and even harder to deal with as I felt so sorry for him, blind, lost, afraid. A terrible situation for which I saw no other option. Rarely have I felt so helpless. He was a remarkably sweet and trusting dog living in a very dark world. He needed love and care and I could provide neither. This knowledge is my penance for not doing more. The sound of a barking dog woke me up that morning and I had no idea it would end so tragically. 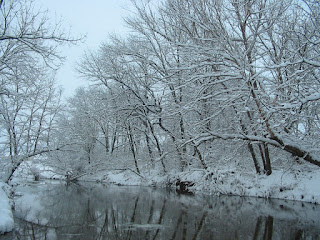 Foxes and coyotes have taken a toll on our helpless birds this year, our ducks, geese, chickens and turkeys. In a particularly brazen attack, coyotes came right into the barnyard and pulled a turkey hen right off the gate where she was roosting. I found her gutted remains the next morning across the road by following a trail of feathers.
By late October we had a trapper setting out traps but it was too late for those we had lost and I won’t replenish our stock until late spring. I only hope our remaining birds last through the winter.
One day as I was driving back to the Hermitage, I saw a fox on the dam across the road. This was odd because they usually hunt at night and are rarely seen. I assumed it was an old fox, probably mangy and wormy and desperate for food. It may have been the same fox our dogs corralled a couple of days later as I was walking them up along the line and had let them run free for the exercise. Sometimes they find a groundhog or a klatch of baby rabbits but this day was different. What they found was fighting back as a blur of red and I knew they had found a fox, whose fangs, claws and aggressiveness could do real damage to our dogs. I ran to a nearby rock pile and brought two good-sized rocks as weapons while yelling to the dogs to move away, which they were only too glad to do.
The terrified fox was indeed old, mangy and scrawny but still a good fighter and was dangerous because it was fighting for its life. I stoned the fox to death as quickly as I could. As with Bowser, I cursed fate for putting me in this situation and having to take this creature’s life. I yelled at the dogs to go on and they continued their run while I threw the lifeless body over the fence where they couldn’t get to it. They eagerly moved on to their next adventure. I found it harder to forget the staring eyes of a creature who only wanted to be left alone so it could continue killing our birds. What a life. 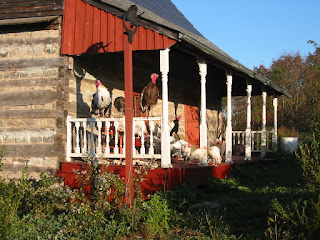 The heron and the catfish

A heron visits the pond every spring summer when the water warms up and the catfish emerge from their winter hibernation in the mud and begin swimming again. She flies in low, her wide wings slowly flapping and she gently lands on the dam. Standing on her long legs, which bend backwards from ours at the knees, she waits patiently at the water‘s edge for a catfish to move near enough for her to stab with her long spear of a beak. When she is lucky and she catches a fish, if it is small enough, she swallows it whole. If it is larger, she typically takes it away from the pond so it will not escape. back into the water. Then she uses her beak as a knife to repeatedly slash at the fish and pull it apart into edible pieces.
This year she learned something different because she quickly noticed how I came down every afternoon with a bucket of food to feed the catfish. The food is small pellets that float on the surface and the catfish swim to the surface, hungrily swarming, dozens of them, frothing about in the water to eat every pellet. The water around the dock where I stand boils with their bodies. The heron watched this and I could imagine her thinking to herself, “How does he do that? He brings them all to the surface while I have to stand here and wait for the occasional fish to swim by.”
Sometimes she remains at the far edge of the pond while I feed the catfish. Other times she flies a short distance away to watch me until I’ve fed the catfish, bringing them to the surface. “For me?” I can hear the heron asking. “Yes, for you,” I reply.
Being a bird of opportunity, as soon as I leave the dock, she begins flying over to stand on the dock herself or else lands in the shallows by the dock and often, with seconds, has a fish which she  proceeds to rip apart and eat.
This puts me in the odd position of being her procurer: by feeding the catfish and keeping them alive, I also offer them up to her so, by their death, she can live. It is a queasy relationship, yet my heart goes out to her. She only has one way of living, spearing fish with her beak. That’s how nature has designed her; she has no options. And it’s a hard-knock life for her; there are days she has flown away hungry, with nothing to eat, to try her luck at another place along the creek.
Even the catfish have grown familiar with her lurking over the edge of the dock. They can see her by looking up through the water and so they often remain down below and sometimes refuse to come up to feed even when I throw food on the surface for them. At such times, when nothing is feeding, I look across the pond to the heron waiting expectantly for them to rise and I say, “Not today, girl.” She will still fly over and assume her position of huntress. Sometimes she still finds an unsuspecting fish but sometimes she doesn’t and so eventually leaves. But the catfish can only go for so long without eating and, when hungry enough, they eventually come to the surface and there she is, waiting for them.
The heron and I have unexpectedly bonded, bird and human. She knows me and will allow me to come remarkably close, but not too close. She has her space and if I enter it, she flies away with slow, loping flaps of her wings. I like to see her at the pond and I like the idea that I can play some role in keeping her alive. There are few things worse for any creature than to be hungry, starving hungry, with no idea as to when or where she will eat again.
As I write this, it is early November. The temperature of the pond water has cooled considerably and the catfish have once again buried themselves in the mud at the bottom of the pond for their long winter hibernation when they slow their body activity to a minimum and simply wait for spring’s warmth. The heron has left for the season. I have seen other herons here in the middle of winter, along the creek when it isn’t frozen over, waiting, waiting, for something to swim by so they can eat. So I don’t know if this heron stays or leaves. In any case, if she survives the winter, I will look for her next year, when it’s warm, when the catfish rise to the surface, when I begin feeding them again and when our connection continues.


Posted by Christian and Johannes at 9:20 AM No comments: