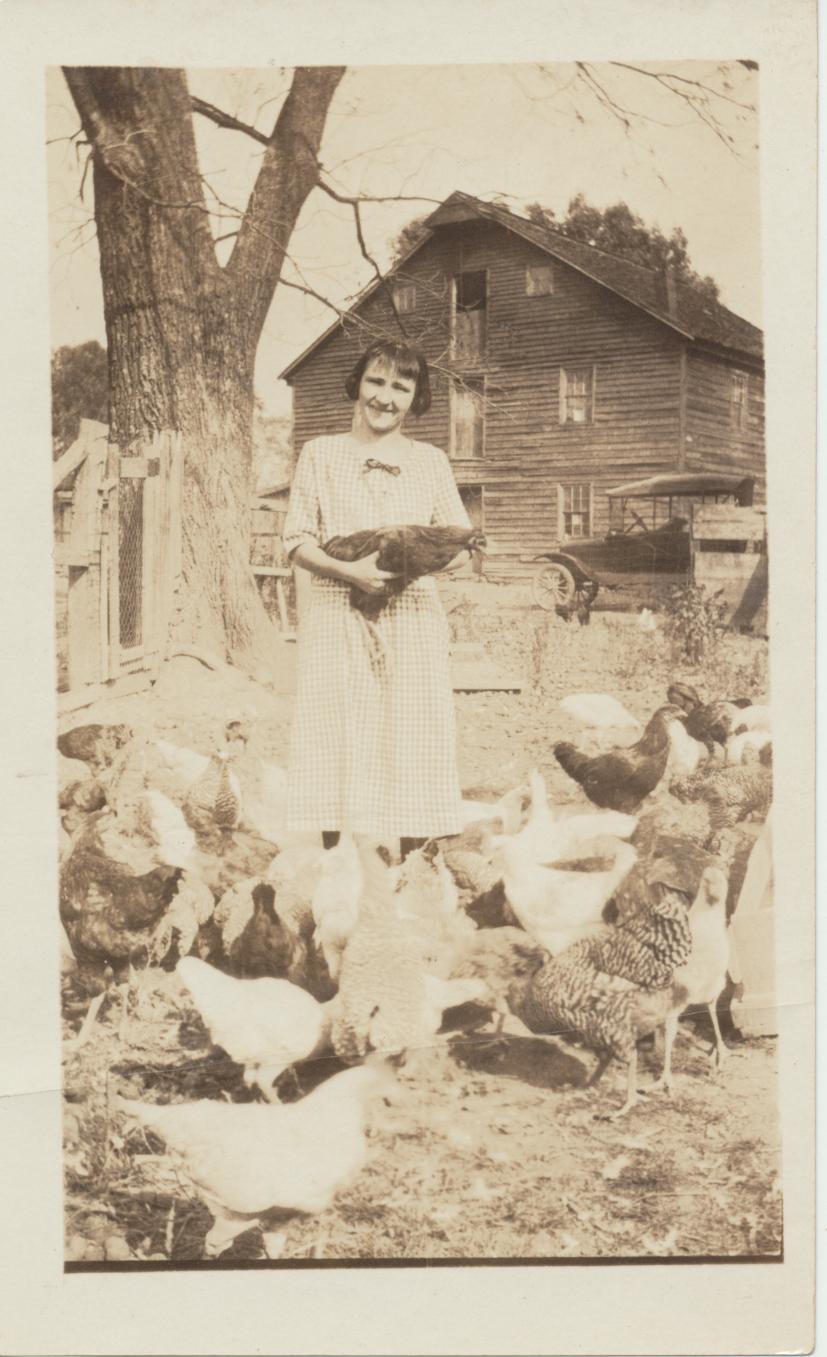 Carrie Shade at Erdman's Mill, Rough and Ready, Penn. Circa 1900 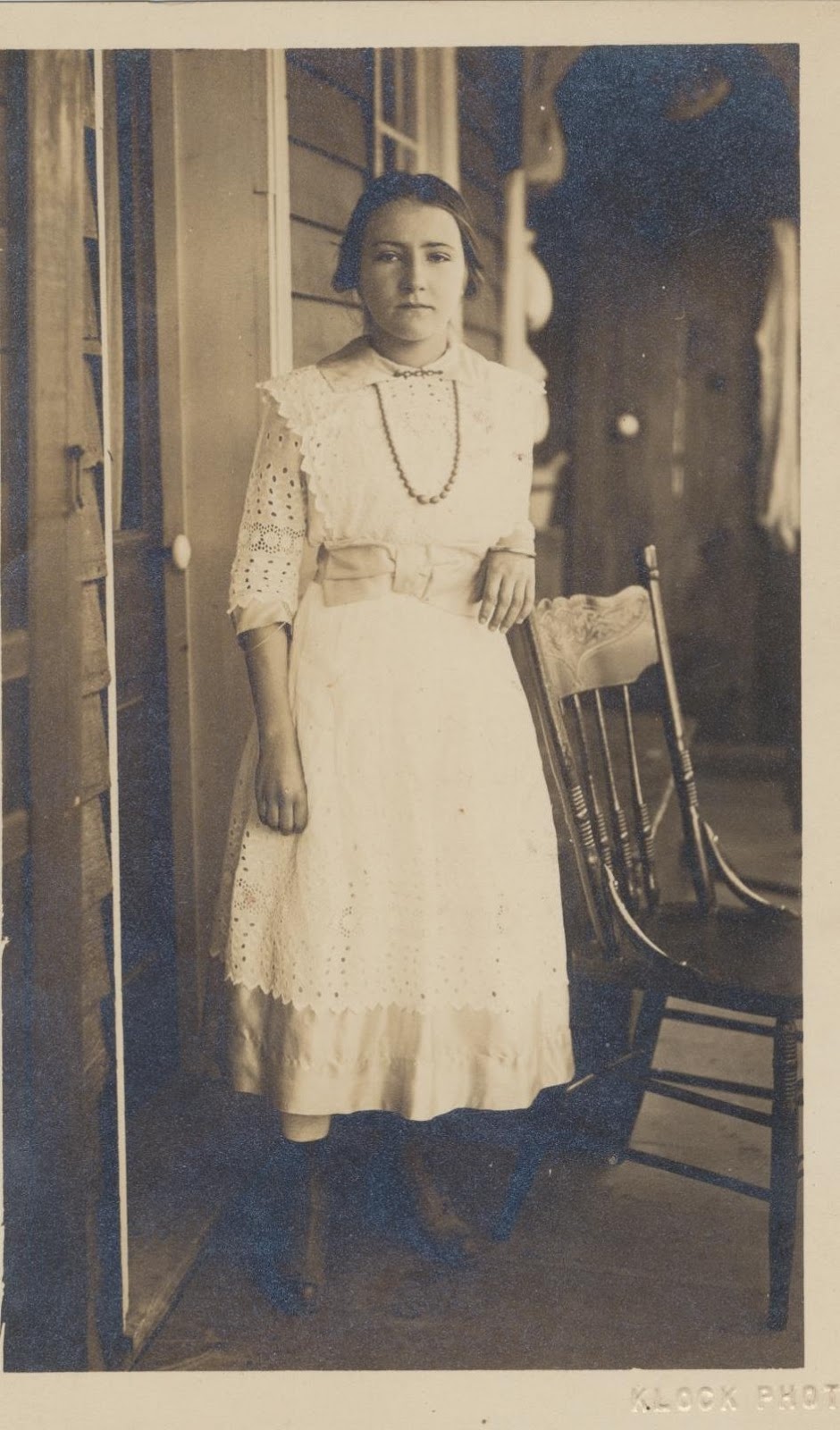 Carrie on the front porch of the miller's house where she lived. 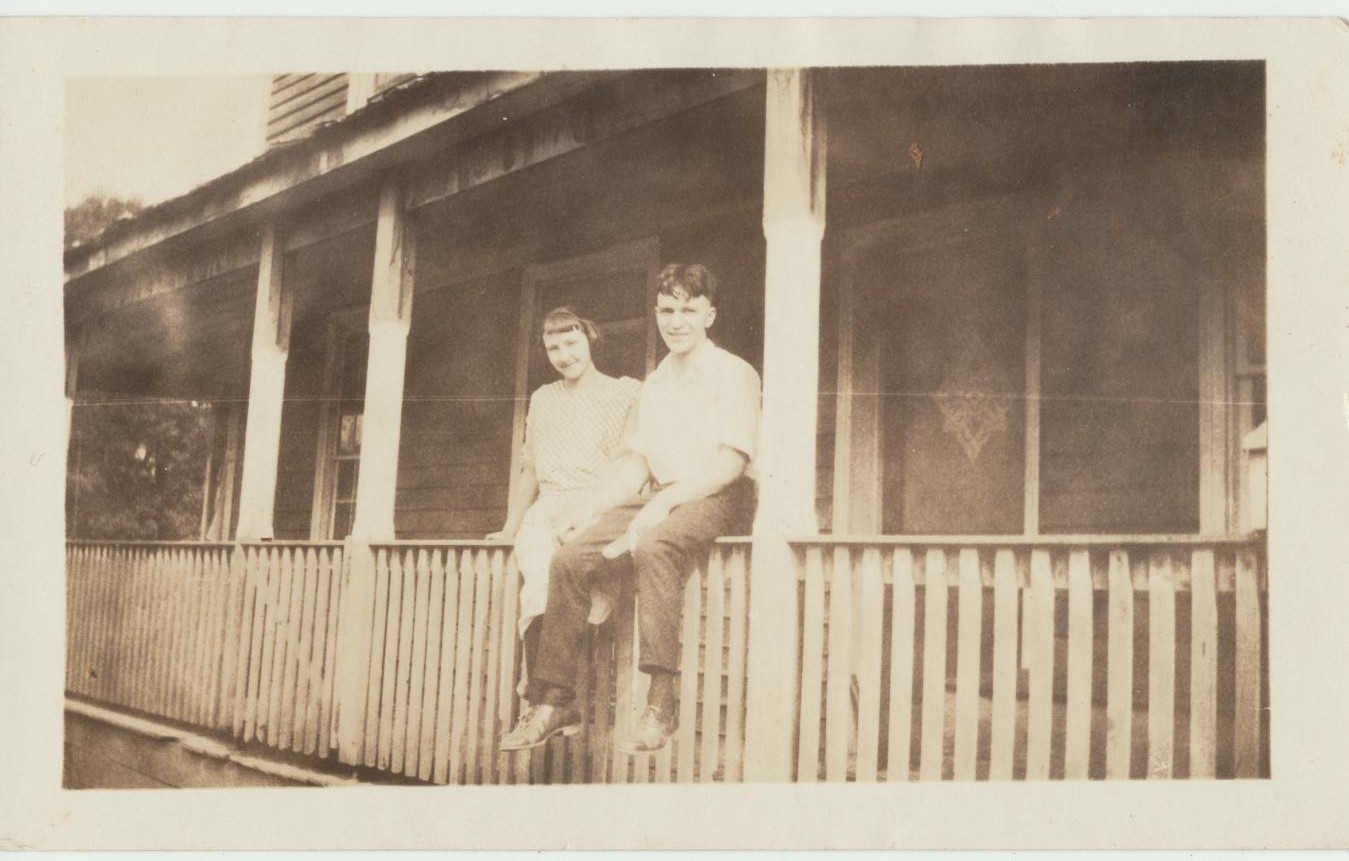 Carrie and her beau sitting on the porch railing 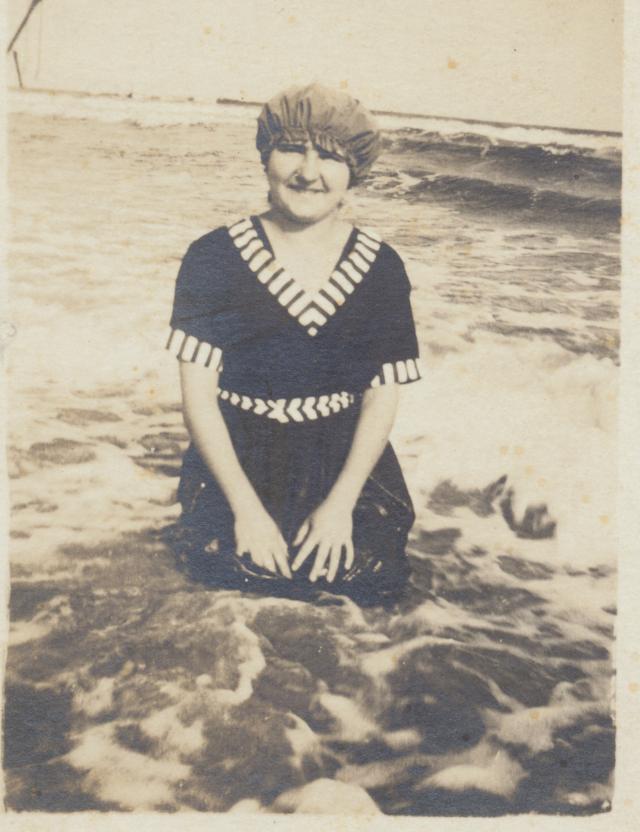 Carrie at Ocean City, New Jersey when she was a nurse in Philadelphia

This is a story of a young woman's pluck and determination to better herself. A neighbor gave us a box full of photographs related to the winter house and she helped identify them. Several photographs showed a young woman, still a teenager, named Carrie Shade. There are pictures of her feeding the chickens and sitting on the front porch railing with a boyfriend. Carrie was related to the Erdman family that owned the grist mill and house. Her mother was a sister to the miller's wife. We're not sure why Carrie had to leave her mother, who lived in a mining town some miles away. She may have been illegitimate but a likelier and far more common reason was that there were probably just too many mouths to feed. In any case, she helped out as a member of the family but there was no future for her here. Not being directly related to inherit the property, she could never be more than a servant. So she did something quite remarkable for someone with a limited education and limited means: she moved to Philadelphia, went to nursing school and became a professional nurse. She was determined to make something of herself and to escape the dismal future ahead for her if she stayed here in the valley.
Pennsylvania Dutch girls such as Carrie often found it hard to work in a cosmopolitan city like Philadelphia because many spoke with a strong, distinctive Dutch accent that prevented them from being hired at major hospitals which preferred a more standardized pronunciation of English. A number of local girls sought employment in Philadelphia only to return because their accent turned out to be a handicap. Carrie either did not have a strong accent to begin with or else changed it to sound more acceptable.
We know she loved going to the Jersey shore. We have post cards from her in Ocean City to the Erdman family so she did keep in touch. One shows her attending a baby parade on the boardwalk and another shows her in the surf. We don't know any more about her than these few pictures but they speak of a determined woman who made her own way in life. A caption for her life could read: Local Dutch woman makes good.

Posted by Christian and Johannes at 6:46 AM No comments:

The Jacob Ramberger farm circa 1900 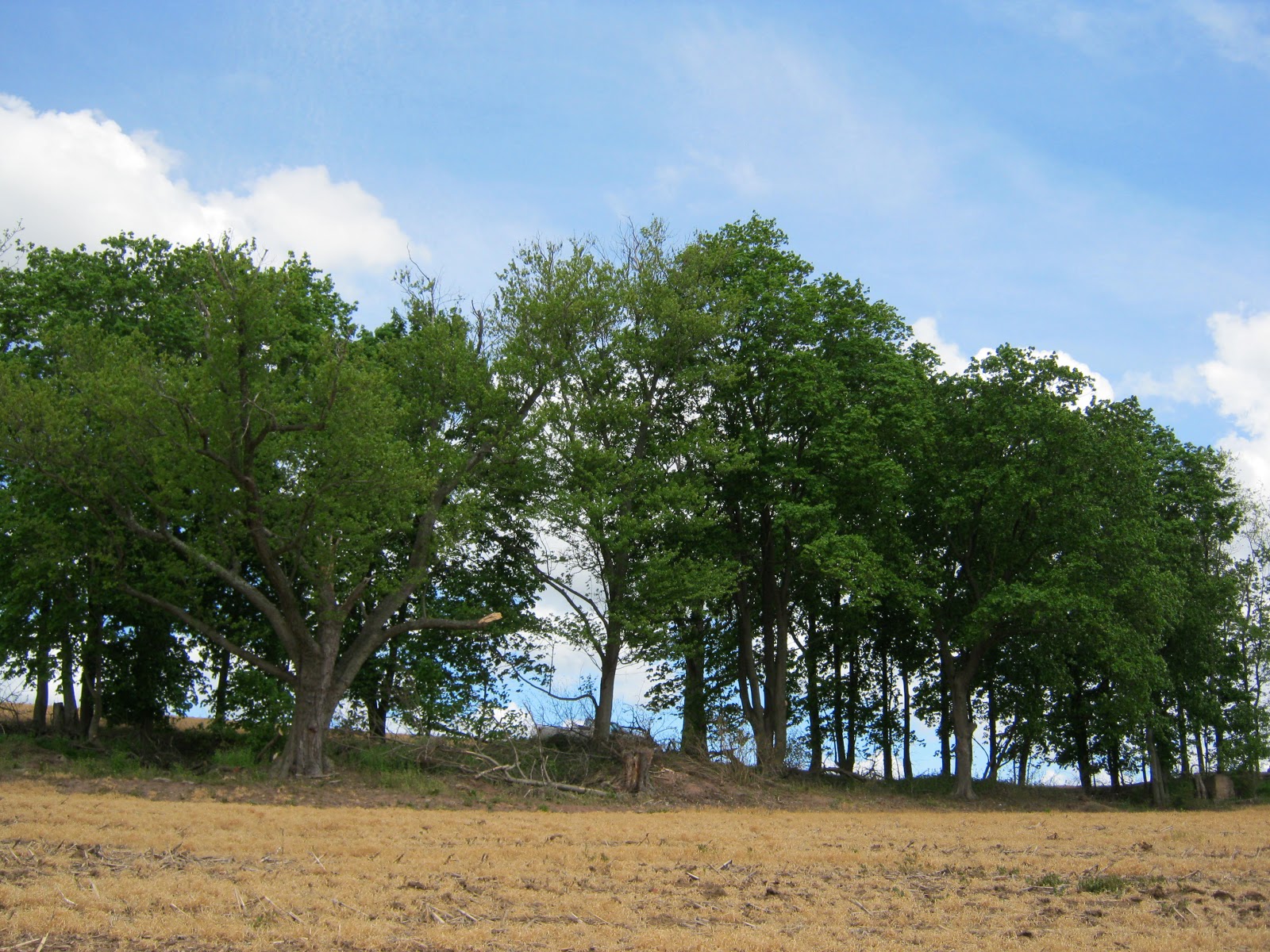 The site of the Ramberger farm today 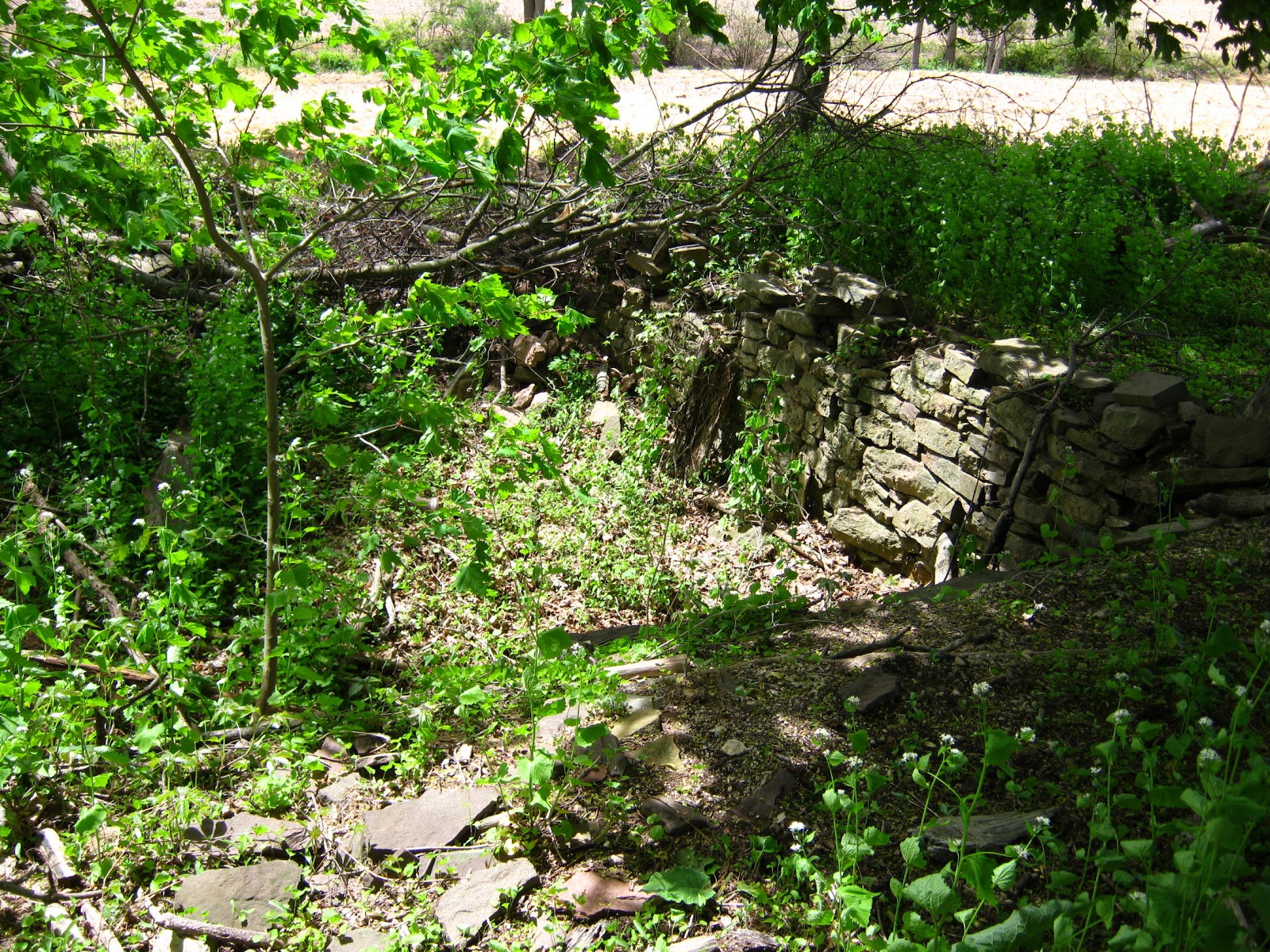 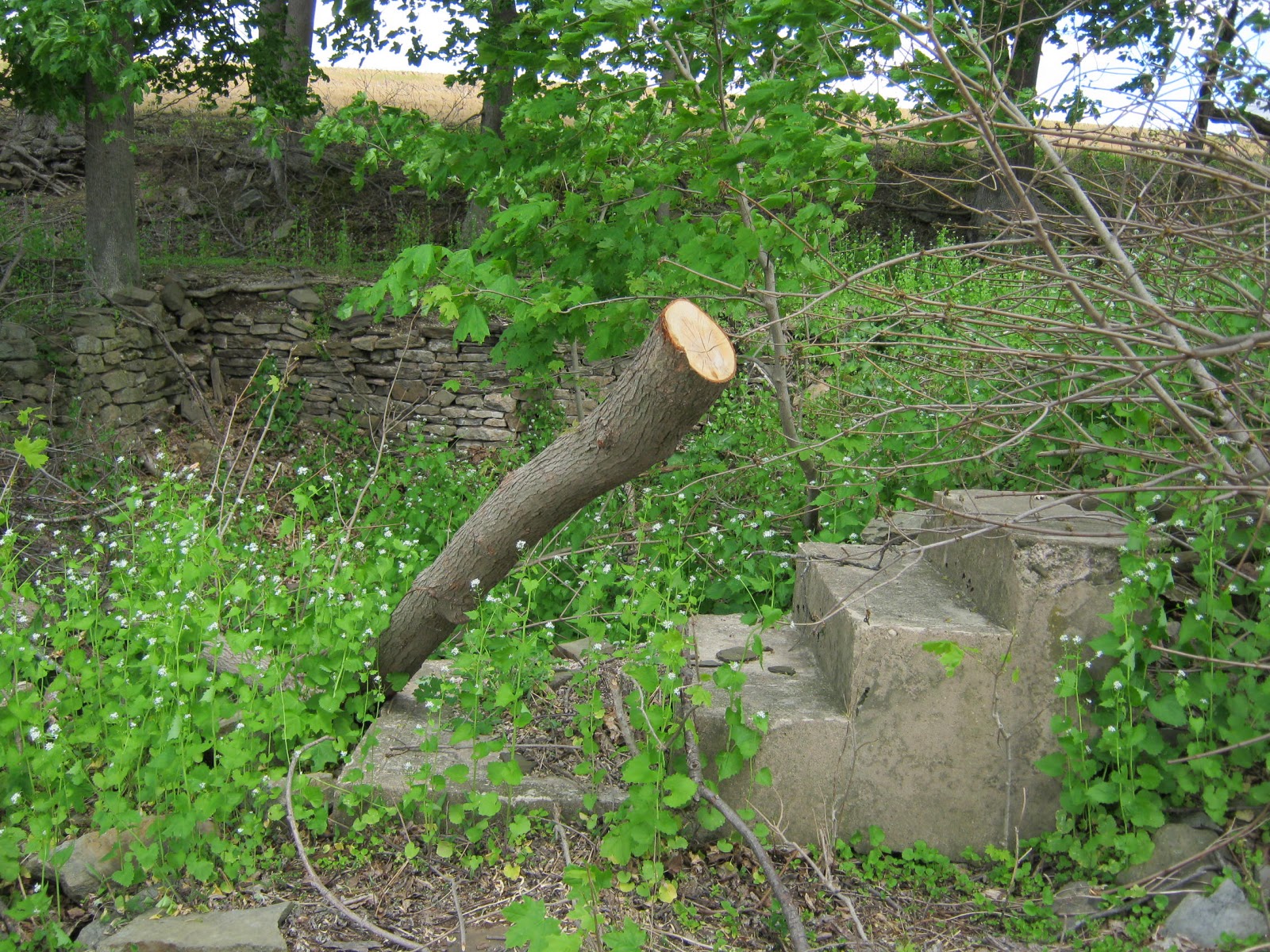 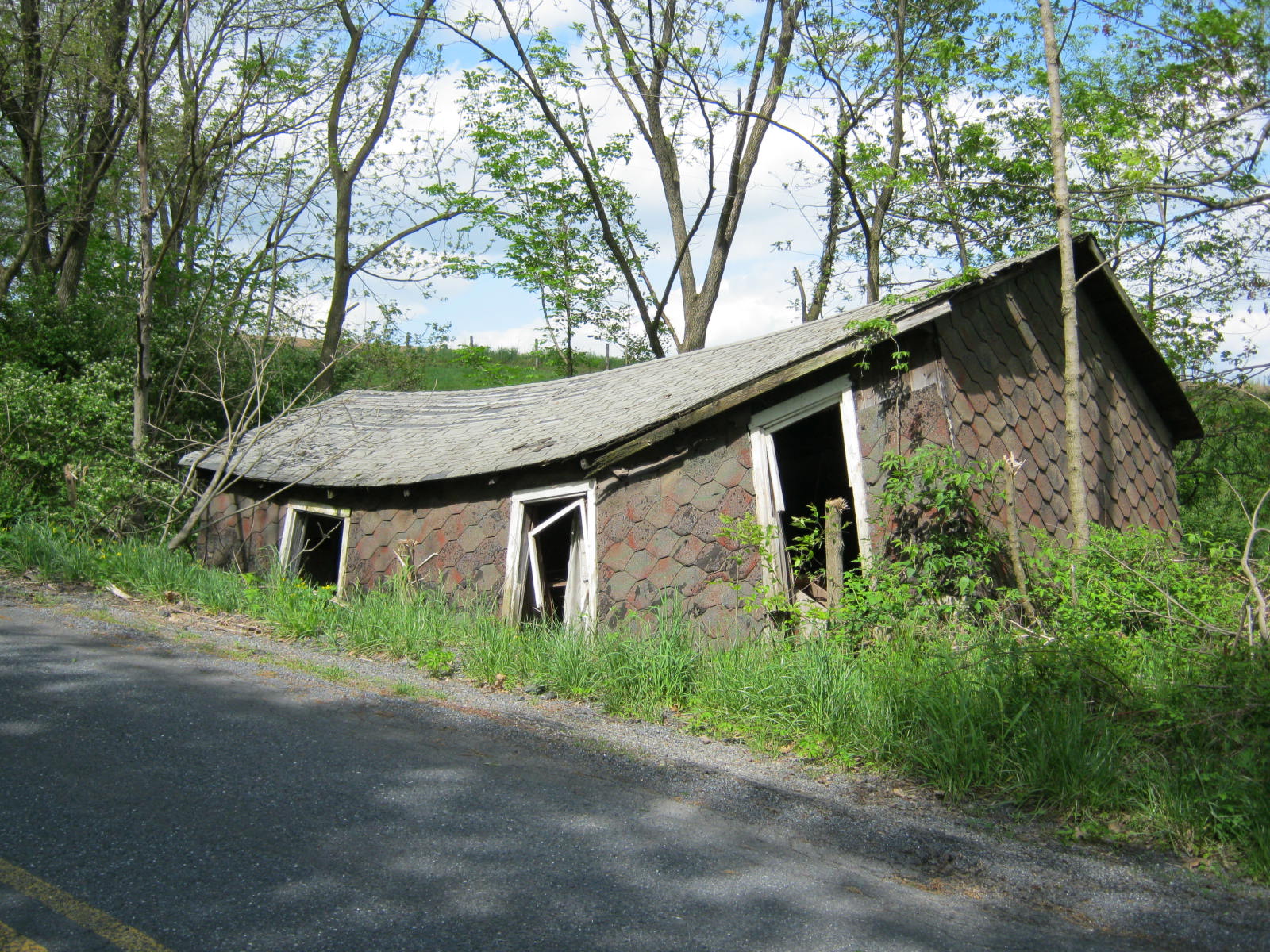 Seven people once lived in this two-room shanty. 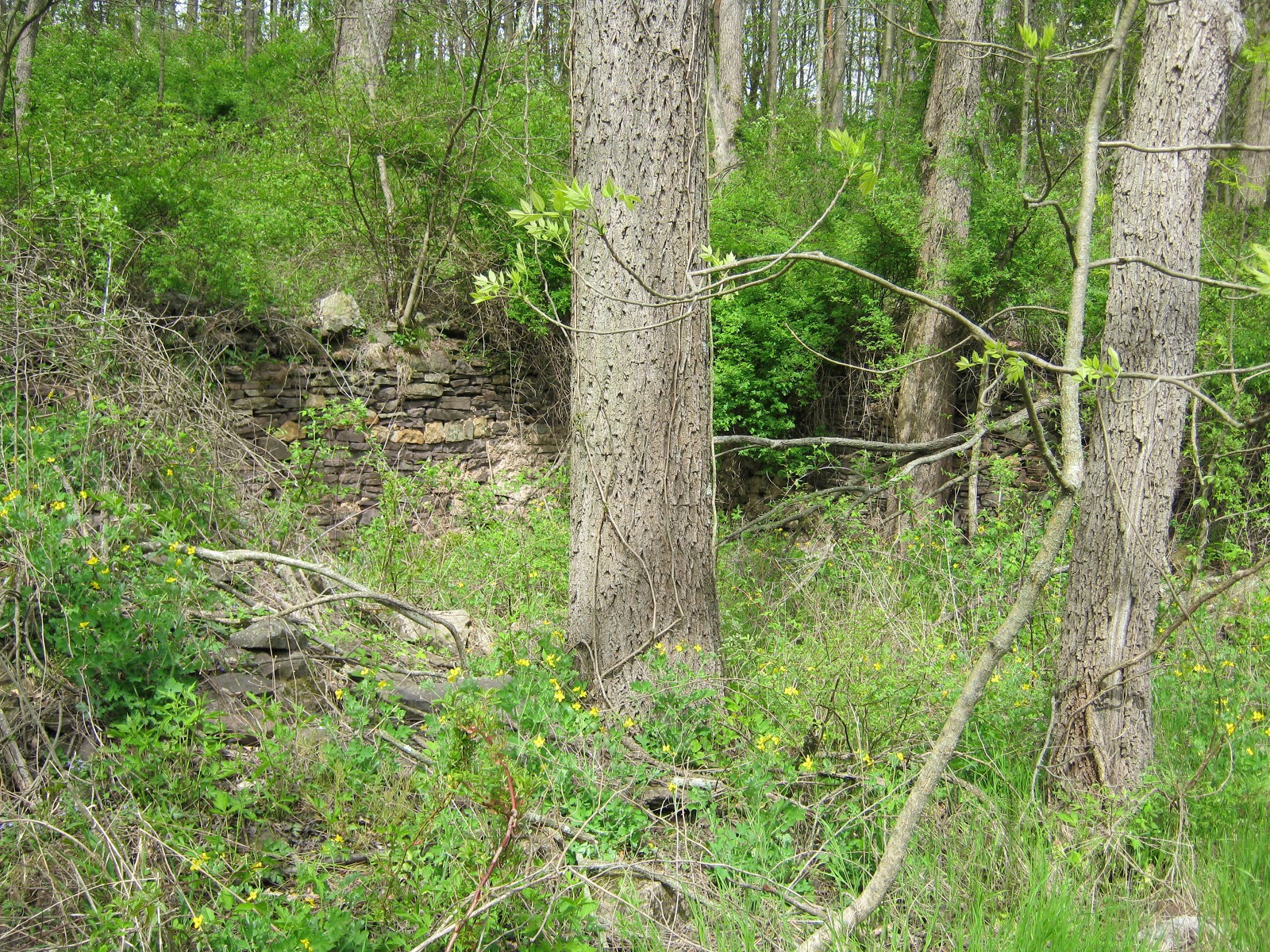 The size of the trees indicates how long the cabin that was once here has been gone.

Time passes. Things change. The human imprint on our valley looks quite different today than it did even 100 years ago. Existing houses for the most part are well maintained and cared for. But what's left is just a fraction of what was once here. Entire farms are gone, allowed to decay and rot or else have been bulldozed and burned. Gone, too, are the smaller houses, the pioneer settler cabins, as well as the shanties and shacks in which the local poor lived. When we came here in 1988 there were still a number of vacant, abandoned houses. We moved some of them here and rebuilt and reused them. But with a few exceptions, most of the others are gone. The houses that remain are wanted houses; they remain by choice and design, not by chance. Almost all of the old places have been covered with siding inside and out; very few retain much of their original look. I can think of just a single remaining log house that looks like it did originally, as well as one stone house and a single timber-frame house. One of each; a sampler of the past. Indeed, the valley has less than half its population in 1850. Most people move away and the older, primitive dwellings are not wanted. Unfortunately many architecturally significant houses were lost due to neglect or simply the lack of bodies to inhabit them.
Such long-gone places are now indicated simply by stone cellars open to the sky. One can drive around the valley and still see these cellars, frequently dug into a hillside with field stones carefully laid on top of each other for the walls. Silent sentinels of former habitation.
Christian and I visited one such site recently. We have a photograph of the farm circa 1900; a thriving place with a double house, pig styes, summer kitchen, bake oven, huge barn, granaries, practically a community unto itself since three families lived there simultaneously, two in the main house and one in the shanty. Today there are only stone foundations left with later cement steps that lead nowhere, a hand-dug well filled in with stones by the house; another one near the barn at one time supplying water for the livestock. It's hard to believe there was so much life at the site, such a thriving, prosperous farm, now gone.
Nearby there is still an abandoned shack that was built in the 1930s, just two rooms with a separate outhouse. Not a farmhouse as the husband/father worked at a sawmill. Still, a family with five children was raised in what is basically a cabin that straddles a creek and now is slowing rotting away and sinking into the gulley beneath it. There were many small places like this at one time, inhabited by many people. It's hard these days to realize just how many people could fit into such a small space and it's no wonder they were abandoned as soon as possible.
View the valley from the top of one of the surrounding mountains and it looks idyllic with its few, carefully maintained farms; a far cry from the teeming, hard-scrabble life of earlier generations.
Posted by Christian and Johannes at 6:38 AM No comments: